This is an installment for a new series on this blog where Joe Brown, Sports Editor for the Red Wing Republican Eagle, and I have a back-and-forth review of a movie. Every two weeks we will take turns selecting a movie — any movie we want — and review it here.  For this installment, Brown picked the 2013 Jean-Claude Van Damme comedy “Welcome To The Jungle.”

Plot Summary: (From Wikipedia) An office team go on a team-building seminar in the wilderness. The group includes Chris (Adam Brody), an meek office worker; Phil (Rob Huebel), a bully who steals Chris’ ideas; Lisa (Megan Boone), an HR manager and Chris’ love interest; and Jared (Eric Edelstein), a sarcastic slacker. However, when their ex-marine guide (Jean-Claude Van Damme) is mauled by a tiger, the office workers must fend for themselves.

Brown: Jean-Claude Van Damme… in a comedy. I was anticipating to say that that idea was funnier than the actual product. And… it’s not far off.

Yes, JCVD has no comedy chops, and that’s not really a surprise. But, with comedians like Kristen Schaal and Rob Huebel (who I loved in “Human Giant”), I figured there would potentially be enough to redeem this movie.

There’s nothing wholly offensive about this movie (except the language if that upsets you). This movie is very by-the-numbers, which is not surprising. I’d say this movie isn’t bad, it’s just… ehh.

Before we get in-depth with this movie, what’s your initial takeaway from this movie?

Froemming: My take was similar to yours in that I thought the idea of Van Damme in a goofball comedy would be more interesting than the final product. To an extent, it is.

While I found myself enjoying parts of this film, it is painfully a generic comedy that tries to take from too many better comedies at once. It tries to be “Office Space” and “Porky’s” and “Tropic Thunder” all at the same time, and unfortunately it makes for an uneven and, at times, baffling movie. Add in the cookie-cutter love interest story that puked out of every romantic comedy trope known to man, it is a story that is too busy to find its groove.

But I do differ from your opinion on JCVD’s comedy chops in that I found his character (Storm) to be the funniest character in the film. I think that is mostly because of how eccentric they made him out to be, and the fact his strange take on “the straight man” in a comedy movie devolves into him being such a weird character by the end.

Aside from finding most of my laughs from JCVD or the strange things the writers attribute to his character that we find out (I believe we both agree one of Storm’s more interesting quirks made for the funniest part of the movie, and he isn’t even in the scene), the film is a basic straight-to-DVD goofball comedy, which seems like a crime when you consider the comedy talents of Huebel and Schaal not really being used in a very effective way. Those two know comedy, and when they can in this film, they lift the movie up. But, again, too many characters, too many plots and not enough attention to streamlining all of that sort of hampers the film down. Holy crap I went long, I apologize.

What are your thoughts, Joe? 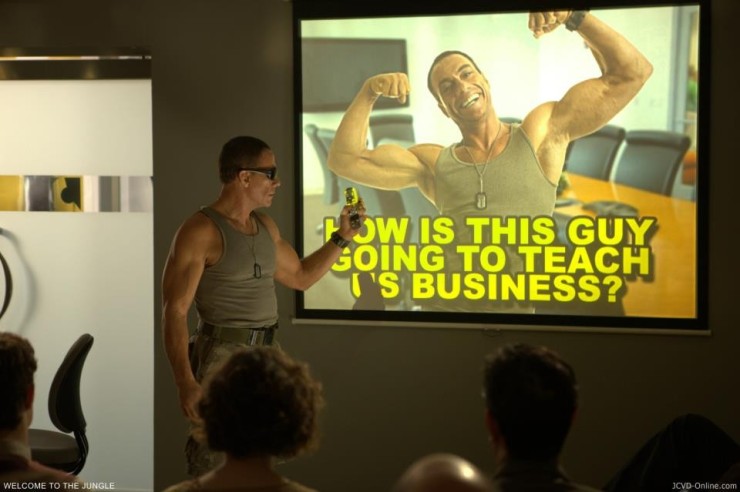 Brown: This movie certainly had very little A-material. It’s scrambling for B-material, honestly. But there was something about Huebel’s performance where even if the script was unremarkable island survival cliches, he was at least going for it. Like in “Human Giant,” he does outlandish well. In this case, he’s a vulgar Jack from “Lord of the Flies” tripping on hallucinogenic leaves. Before the movie heads to the island, he can really play the shady office croney quite well.

There’s some little things that kind of grew on me as the movie went on: Lisa, the female lead played by Megan Boone, was adorable. Watching Brenda (Schaal) devolve as the movie progressed was pretty amusing. And there were a few jokes that had me laughing out loud, albeit for a brief period.

Here’s where you and I will differ: I though JCVD really dragged this movie down. Storm Rothchild, which is a character name I swear was used in “Mystery Science Theater 3000,” did very little for me. I thought JCVD being in this movie would be bad because they’d have to shoehorn in a bunch of 90s action movie nonsense to justify having him in the film. Instead, he gets attacked by a tiger (not quite as epicly as it sounds on paper) 30 minutes in. And in those 20 minutes he’s not on screen, we actually got some forward momentum in the plot… it was all taken from “Lord of the Flies” and a little bit of “Office Space,” but at least it was progressing. It seemed so phoned in that once we FINALLY get the payoff of JCVD karate-kicking Huebel at the climax, I just didn’t care. He did the scream from “Bloodsport” and I didn’t care.

I don’t know, man. That would have redeemed this movie somewhat if I heard the opening chords coming from Slash’s guitar.

Any final words on our inaugural movie selection, or do we leave this review to inexplicably whither and die like the pilot in this movie? Plot holes!

Froemming: I will add a few more thoughts. While I apparently enjoyed JCVD in this film more than you did, Joe, I couldn’t escape the fact that his character was mostly useless to the whole plot. Sure, he brings these office drones to the island for his program, but after that he has no use for the story beyond simply having JCVD around — and he doesn’t even show up much for the second act of the film. He randomly appears off-and-on again for the third act, in which he mostly sits either on the ground or in a wheelbarrow.

The funniest thing in this movie, which I alluded to above, is the fact Storm’s first aid kit contains nothing but Dave Matthews bootlegs on cassette. That sort of weird, random humor I would have preferred more of. That and Troy’s freakout about learning the violin during the screaming exercise were moments I laughed out loud.

Huebel was great for the office jerk role, and hamming it up as a self-appointed king of the office folk while tripping on jimsonweed was entertaining (the fact he ate two of poor Javier’s fingers before realizing he didn’t like it was both funny and showed how much of a prick this guy is). But that was not enough to come close to saving this film.

As for the song, I was also waiting for the classic Guns N’ Roses track (or at least a terrible cover) to pop up at some point in the movie. But, alas, perhaps they blew their budget on that one Van Damme slow motion kick at the end, and forgot they named a movie after a popular 80s rock hit.

Brown: No. Even the curiosity of JCVD in a comedy doesn’t make this worth a watch. For such a potentially ridiculous plot device like that, it’s a very unremarkable movie.

Froemming: No. It was just a throwaway movie that had potential, but really lost it along the way. Which is a shame because I like a lot of the cast in the movie, saw potential in some of the characters, but is ultimately a very forgettable film.

2 thoughts on “The JOE-DOWN Reviews ‘Welcome To The Jungle’”