All right, it is “Fuller House” week here at the JOE-DOWN, where we will review two episodes of the Netflix revival of “Full House.” This will run until Saturday.

Today, Joe Brown and I review episodes three and four.

(When Stephanie, Kimmy and DJ have a girls’ night out and leave Joey in charge of the kids, things get wild out on the town and at home.)

Brown: Right away, we see Stephanie and Kimmy in dresses ready for a night out on the town. They called each other fleek, which is hopefully the death nail of that word in the English language.

But, because DJ is trying to be a responsible parent, she’s staying in to do laundry. But, because Stephanie is a party girl and Kimmy is human garbage, they convince DJ to come have a girls’ night out. And who’s there to watch the kids? The most under-qualified of all the adults: Joey.

Froemming: Joey, the psychopath, decides to get the kids away from their devices so they can completely destroy the house with silly string, slime and toilet paper. He is an unhinged maniac who wants to see the world burn, like an unfunny Joker.

Brown: Every time Joey was on screen, I went full “Shining” in my notes: 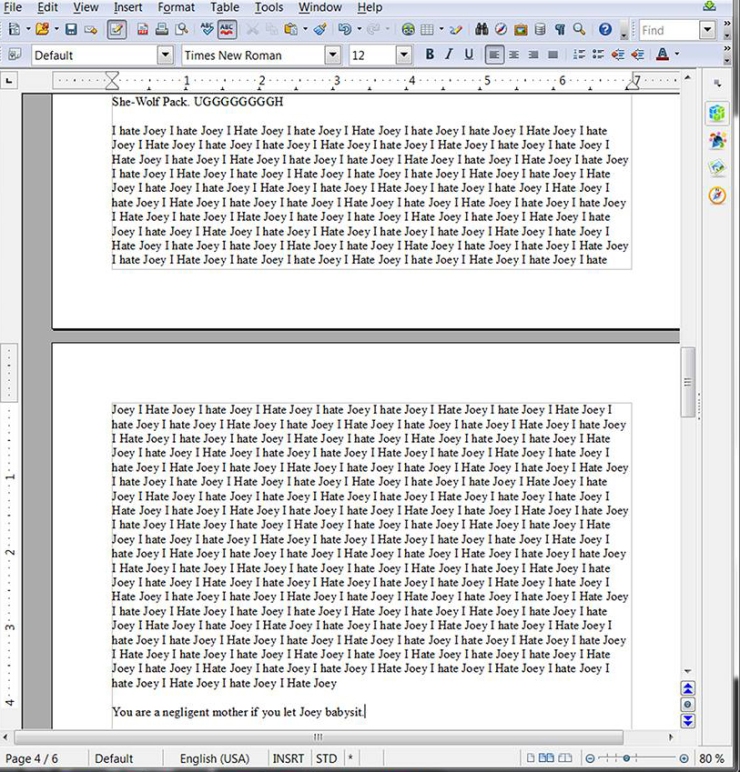 Where should I begin with my problems with Joey? Like you said, he has all these squirt guns and child toys on a coffee table for the kids, then at the climax he spills Nickelodeon Gak on Steph, DJ and Kimmy. What mid-50s man owns this stuff unless he has a membership to NAMBLA? And he throws out these annoying impressions to a child. Know what you should impersonate, Uncle Joey? A respectable adult! Finally, he fakes being a pizza man! I’m sure he’s duped a lot of families with that same trick.

I am convinced that the only reason Joey lives in Las Vegas is because Vegas isn’t much of a vacation spot for young children and he’s probably got warrants and restraining orders in California.

Froemming: While Joey is unleashing his madness upon these children like a creepy Willy Wonka, Stephanie, Kimmy and DJ hit the club — the club where Kimmy has no issue telling her friends she and her (now separated) husband Fernando spent most of their nights (like Bud and Sissy hanging out at Gilley’s in “Urban Cowboy”). To the point she had a clean bra behind the cash register. This is a dark look at the sad life of Kimmy and her husband, but we laugh it off because she is so quirky. HAHA, addiction is funny.

Brown: The thing that bugged me is that we’re introduced to a pair of brothers who try to hit on the trio, because in a show full of cliches, why not have a pair of creepy European sex fiends?

Though, I did find out that these brothers do have a reason for being there: it’s a guest spot for Maksim and Valentin Chmerkovskiy, who are choreographers for “Dancing With the Stars.”

Froemming: Candace Cameron Bure was also on that show too. Get it! HAHAHA, yeah, it was a bad joke.

So while at the club, Fernando shows up and starts flirting with Kimmy — even though he is there with another woman. Which sets up the stage for a dance competition.

Oh yeah, Grammy award-winning singer Macy Gray is in this episode. I felt terrible for her in this.

Brown: At first, I appreciated Macy Gray being able to poke fun at herself, but yeah, it just kept getting more depressing. She was a highly-regarded singer once upon a time. Now, she’s friends with Stephanie Tanner and sings at sparsely-attended bars in San Francisco. After she’s done singing “Time of my Life,” she says aloud “I won a Grammy, what the hell am I doing here?” I agree, Macy. What are you doing here.

Froemming: I think we all agreed. Of course, DJ tells Fernando that if he wins this competition, he will be hurting Kimmy more. So he throws the thing, everyone is happy and they come home to get slimed, because of Joey’s insanity has rubbed off on the kids and they want to be pranksters.

Brown: And Joey leaves everyone with the mess because he is a monster that ruins lives for laughs that never, NEVER come.

Froemming: Unlike Joey, let’s read the social cues and move on with our lives with episode four.

(Jackson tries to help Ramona at school but that lands them both in trouble and leads to a disagreement between DJ and Kimmy over parenting styles.)

Froemming: This episode starts off with Stephanie complaining that an infant child is somehow tricking her into staring at the ceiling. At this point, I too felt like staring at my ceiling because I was so used to my eyes rolling upward from the previous episodes.

Brown: I think it’s much darker than that. I think in order to cope with her current unemployed status and living back at home with annoying children, her co-dependant and their quirky “sister wife,” Stephanie has gone back to taking drugs. She’s at least on mushrooms here as she stares blankly at the ceiling. She is getting duped by a child, after all. I’m sure the baby is talking to her, letting her know that gullible is written on the ceiling.

Froemming: Well, she lives in San Francisco, is a DJ named DJ Tanner (ugh) and has no money, job or anything. And she is always eating (in episode two, she and Kimmy ate an entire cake!). She has to be hopped up on something.

Brown: Didn’t she try to give Ramona and Jackson some candy from a rave in episode one? And I think in episode two, she made a reference about her being good with needles. Final point: There is a part later in this episode when she asks right away when DJ can pay her for helping DJ out. She needs money RIGHT NOW. There is a dark, dark story that is not being told about Stephanie.

Froemming: She has seen things, man, that’s for sure. But here, she is stuck babysitting the infant, Tommy, because everyone has jobs and she is a bum living for free at her sister’s house. DJ has an emergency down at the vet, and Kimmy has to plan some party.

All the while, at school, Ramona is missing her old friends from wherever-the-hell she and Kimmy lived before. So Jackson decides to help his fellow prisoner friend sneak out of school.

Brown: Now, I never did it because I was a goody-good, but there’s no way it’s that hard to play hookie in middle school, right?

Froemming: It was pretty easy for me, but things changed after Columbine for me in sneaking out (that happened my junior year in high school), so I have no idea anymore. It did seem ridiculously difficult to get out of the school. Like it was “Prison Break” or something, I’m surprised Jackson didn’t have a map of the school inked on his body, since this show now seems to go in weird directions now.

Brown: We need to address the subplot of this show, which is that Max wants a puppy. There are some golden retrievers (or something) at DJ’s pet clinic, so Max gets dressed as the preacher from “Children of the Corn” to pick his puppy. And the whole episode is him trying to decide on a dog. Without looking ahead, I’m calling it: He’s getting ALL the puppies.

Froemming: It was very creepy with him sitting with all those puppies, trying to decide on which one he wanted. It was more unsettling later when everyone is sitting in tomato soup. This show is psychotic.

Brown: Oh, when you mean hilarity ensues when Max, the puppies and Stephanie all get sprayed by a skunk in the pet clinic? Max probably saw his aunt naked and that is all sorts of messed up. And instead of concern, DJ takes a photo of the whole ordeal to put on Facebook. Hey dumb-dumb, if your boss sees that photo, you’re going to get fired.

Froemming: A skunk that two strangers just dropped off at the clinic like it was a terrorist attack or something? They just ran away after letting that thing loose.

Brown: On the topic of strangers, Stephanie finds a guy at a coffee shop that stares at the ceiling like she does when Tommy looks up. If there isn’t a love connection, I think Stephanie found a dealer.

Anyway, when Jackson and Ramona get suspended for setting off the fire alarm and trying to play hookie, respectively, DJ and Kimmy have to punish the kids.

Froemming: Something Kimmy has a hard time doing because she spoils the little brat. But hey, DJ goes full-Danny Tanner on her with kind words and a moral to the story: Kids love rules and boundaries.

Brown: There is such a disconnect with how lessons like this were taught in the 90s and how they would happen now. Ramona wouldn’t be respectful of her mom. She’d be angry then go on social media and talk about how terrible she is. Lessons from the 90s hardly apply here, folks.

Froemming: Yup, she would have made an angry YouTube video and gone viral complaining about having to do chores. This is where we are at people.

Brown: We’re four episodes into this and want this to be over. We only have… four more days after this? Crap. I hate you for making us do this, Kyle.

Reviews for episodes 5 and 6 will be up tomorrow, March 2.